More information about these particles are below:

Atoms with the same number of protons but different number of neutrons.

The specific charge of a charged particle is defined as its charge divided by its mass. For example: 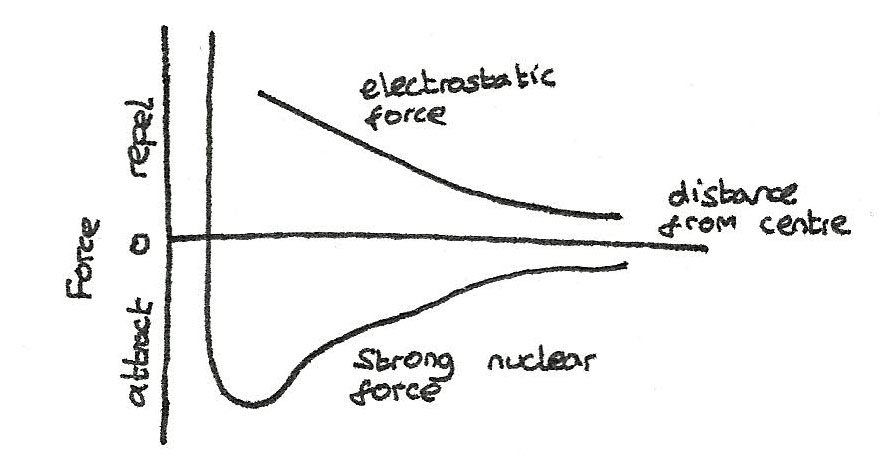 Visible light is a small part of the electromagnetic spectrum, which is made up of many types of waves of different wavelengths.

$$ \lambda = \frac {c}{f} $$
When electromagnetic waves are emitted from beta decay, they are emitted as small bursts of energy known as photons. The energy of a photon can be calculated by:

All particles have a corresponding antiparticle. These are particles that share the exact the same properties as the matter particle except for the charge and the spin. For example an antiproton is a negatively charged particle with the same mass as the proton.

When energy is converted into mass, equal amounts of matter and antimatter are produced. This is process is called pair production. If one gamma ray photon passes close by a nucleus, a particle and corresponding antiparticle can be produced. 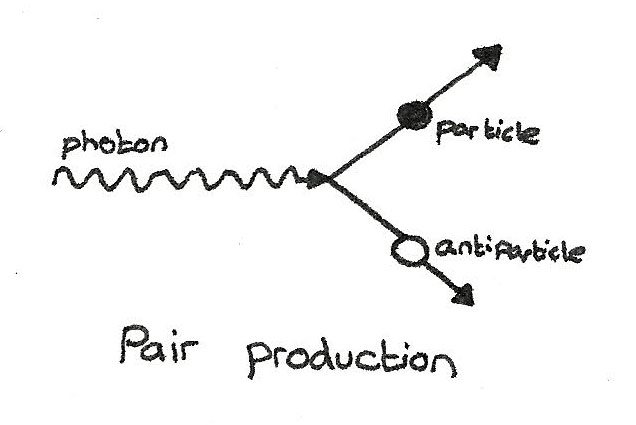 The opposite process is where a particle and its corresponding antiparticle collide, converting the mass back into energy. 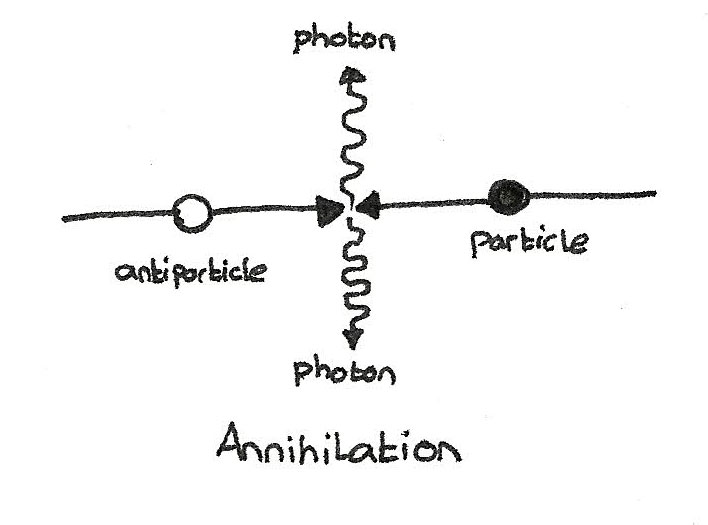 Particles can be divided into certain groups deepening on their properties.

Hadrons are particles that experience the strong nuclear force and are composed of smaller particles called quarks. Hadrons are subdivided into two groups:

Leptons are fundamental particles that don't feel the strong nuclear force. Examples of leptons include the stable electron ($e^{-}$) and unstable muon ($\mu^{-}$) and tau ($\tau^{-}$) which both decay into electrons.

Neutrinos are also leptons, with a different neutrino for electrons ($\nu_{e}$), muons ($\nu_{\mu}$) and tau leptons ($\nu_{\tau}$). Neutrinos have negligible mass, no charge and only interact through the weak interaction.

Quarks are fundamental particles which when arranged together, form hadrons. Three types of quarks, up ($u$), down ($d$) and strange ($s$) have different properties that give the hadrons certain properties. Strange quarks have a property called strangeness.

Baryons are composed of three quarks.

Mesons are made up of a quark and an antiquark. As $K$ mesons have strangeness, they include a $s$ meson. 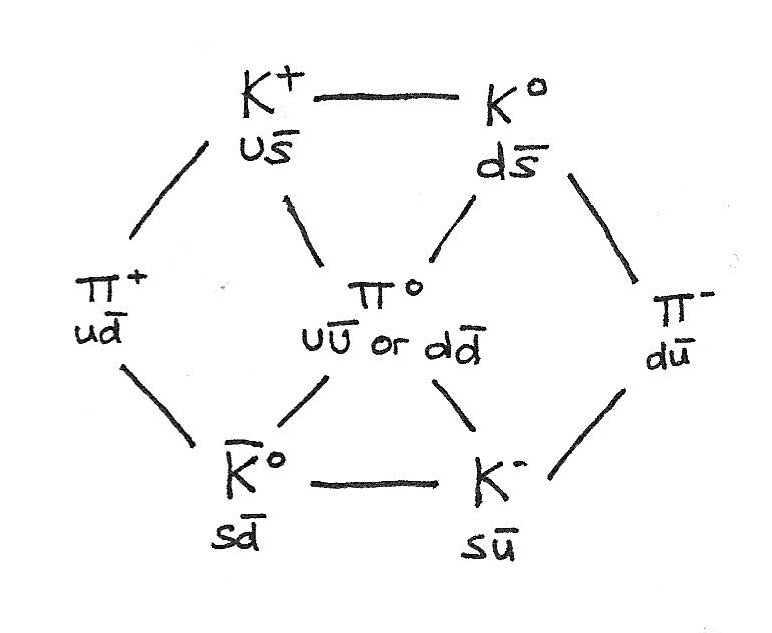 When interactions occur, certain laws must be obeyed:

For an interaction to occur, an exchange particle called a gauge boson must be exchanged between particles. There are four fundamental forces, each with its own gauge boson.

The larger the mass of the gauge boson, the shorter the range of the force. The $W$ boson involved in the weak interaction has a mass 100 times that of a photon meaning it only has a very small range. A photon on the other hand has a zero mass, therefore has an infinite range.

Feynman diagrams can be used to show interactions. On these diagrams:

Some interactions are shown below: 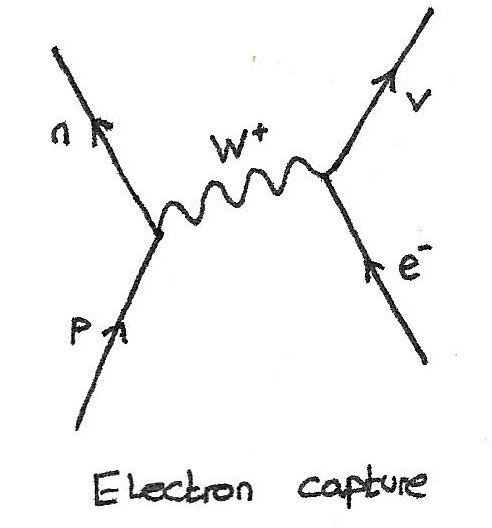 In electron capture, an inner shell electron interacts with a proton from the nucleus. 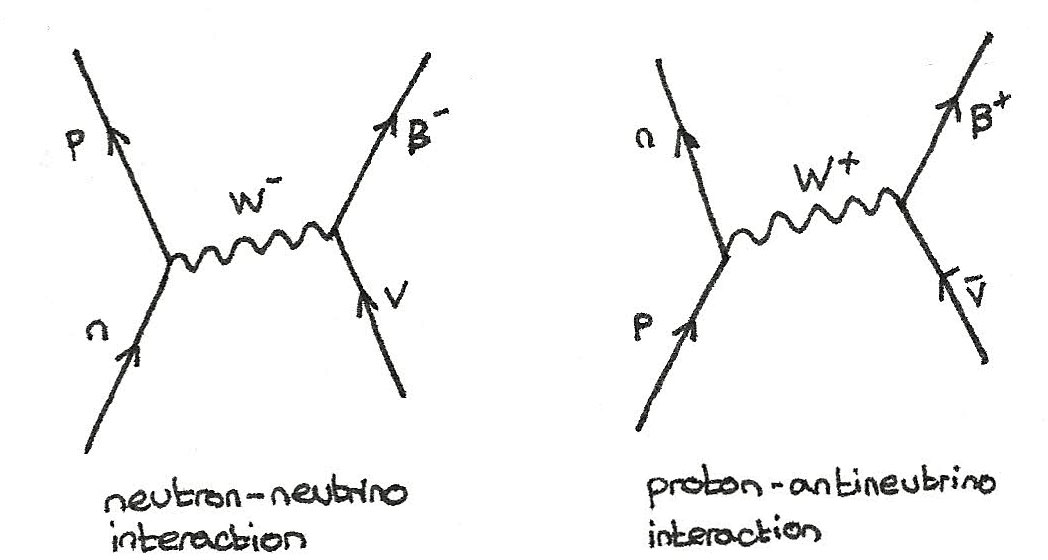 In the interaction between neutrinos and baryons, the baryon changes and an electron or positron is released.