Nuclear magnetic resonance (NMR) spectroscopy is an analytical technique used for determining molecular structures. In organic chemistry, proton ($^{1}H^{+}$) NMR and carbon-13 ($^{13}C$) NMR are commonly used. NMR works on the principle of nuclei absorbing and reemitting electromagnetic radiation. A spectrum is produced with peaks corresponding to the atoms in a structure.

Chemical shift $\delta$, is the position on an NMR spectrum at which a particular nucleus absorbs energy. The $\delta$ scale is measured in parts per million ($ppm$).

Chemical shift is measured relative to a single sharp reference signal from tetramethylsilane (TMS) defined to be at $\delta = 0~ppm$. As it is chemically unreactive and volatile, it can be removed from a sample after use.

In NMR spectroscopy, the sample is usually mixed into a solvent. As organic solvents contain hydrogen and carbon, an alternative solvent must be used to reduce unwanted signals on the spectrum.

Deuterium ($D$) is an isotope of hydrogen with one proton and one neutron which due to an even number of neutrons, doesn’t produce a visible signal. $CDCl_{3}$ is therefore commonly used as a solvent. In carbon-13 NMR, the carbon peak can be automatically removed from a spectrum. After the analysis, the solvent can be evaporated to recover the sample.

Carbon-13 NMR is a method used for the identification of carbon atoms in an organic structure. On a spectrum the chemical shift, $\delta$ corresponds to the environment a carbon atom is in. An environment refers to the position and bonded atoms to a carbon atom in a compound. The diagram below shows typical shifts for different environments:

The actual values may vary depending on the solvent, concentration and any substituents used.

The size or area under a peak doesn’t indicate anything about the number of carbon atoms in a particular environment.

The displayed formula of pronan-1-ol and propan-2-ol are shown below, with the carbon atoms labelled according to the carbon environment they are in.

The NMR spectra for propan-1-ol and propan-2-ol are shown below. The carbon environments in the structure are represented by the peaks.

For propan-2-ol, the spectrum has two peaks and therefore two carbon environments:

As two carbon atoms are equivalent they are shown as a single peak at $\delta = 28~ppm$ for $C-C$ on the spectrum.

A proton NMR spectrum gives the following information about the hydrogen atoms in a structure:

The chemical shifts indicate the types of proton environment and functional groups in a compound. A proton NMR spectrum has a narrower range of values for the chemical shift so overlapping of signals may occur.

The chemical shift for $O-H$ and $N-H$ can especially vary depending on the concentration and solvent used. 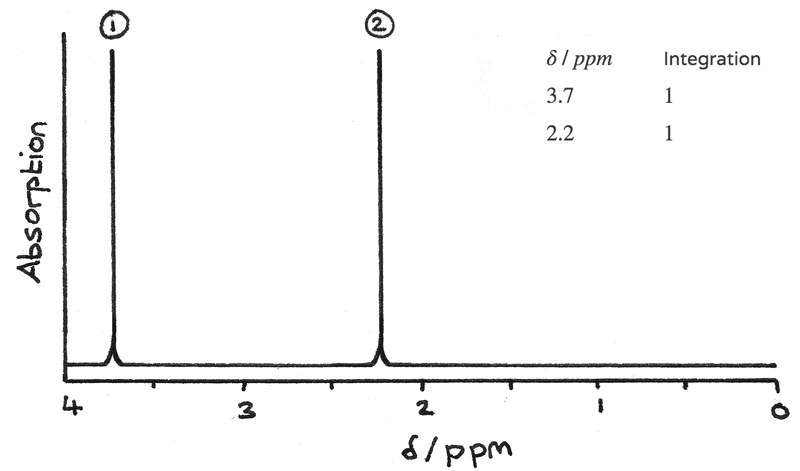 The chemical shifts indicate the type of proton environment:

By collating this information together the analysed sample must have the structural formula $CH_{3}COOCH_{3}$. The displayed formula is shown below with the hydrogen atoms labelled according to their environment. 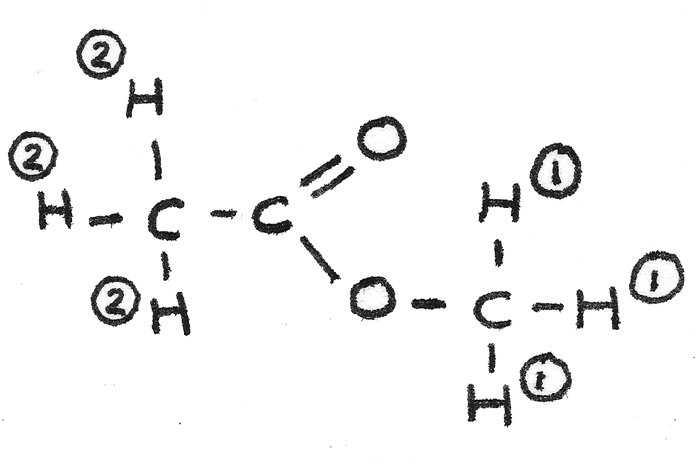 Signals in an NMR spectrum may be split into distinctive patterns due to interactions between protons on adjacent carbon atoms. This splitting can indicate the number of proton atoms on adjacent carbons, which assists in deriving a structural formula.

In NMR spectroscopy the number of protons on an adjacent carbon, $n$ corresponds to a peak splitting to form $n + 1$ peaks. 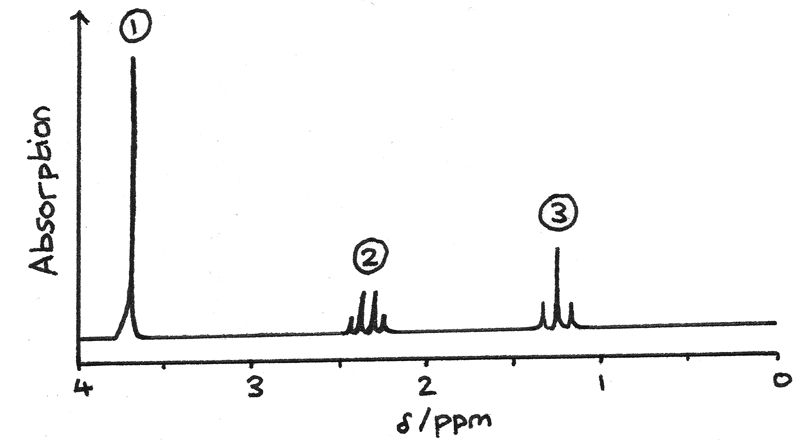 Spin-spin coupling occurs between non-equivalent protons so protons on the same carbon atom do not produce their own splitting pattern.

NMR with -OH and -NH Protons

The protons attached to $-OH$ and $-NH_{2}$ groups are called labile protons. These can be difficult to identify as:

Deuterium oxide ($D_{2}O$) can be mixed with a compound in order to exchange $-D$ in place of the hydrogen atoms on $-OH$ and $-NH$. As $D$ has an even number of nucleons, it produces no visible peak on a spectrum. By comparing the spectrum with $D_{2}O$ to the spectrum without $D_{2}O$, it is possible to identify the peaks generated by $-OH$ or $-NH$ groups. 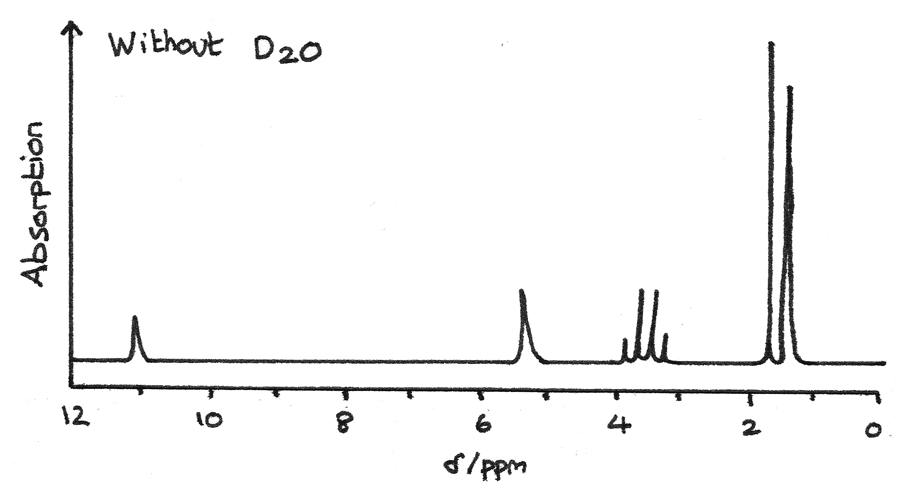 The spectrum below is after $D_{2}O$ has been added to the mixture. The missing peaks indicate that they were originally due to $-OH$ or $-NH$ groups. 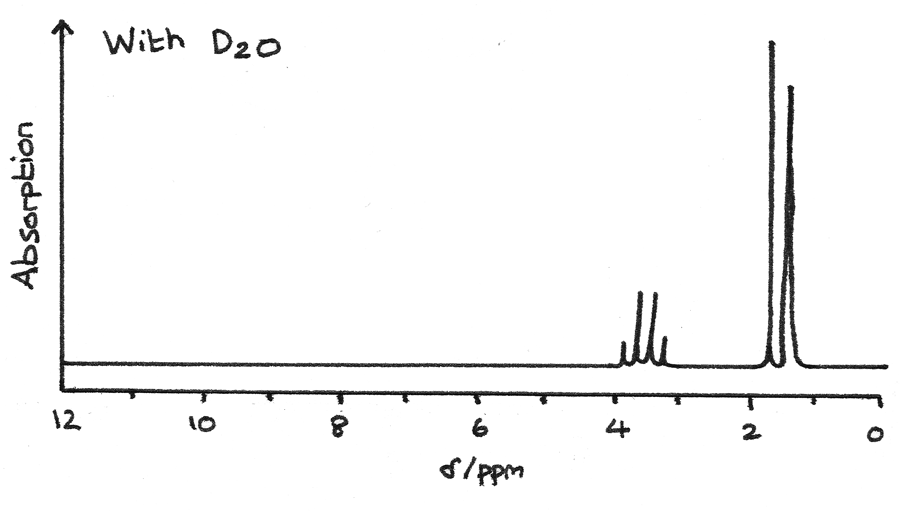 NMR can be used in a medical scanning technique known as magnetic resonance imaging. MRI scanning is a non-invasive and non-destructive method of imaging internal organs.

MRI produces a three dimensional NMR spectrum based on the concentration of hydrogen-containing molecules throughout the body. This information can be used to detect and monitor tumours in organs or to reveal injuries in muscles or tendons.

The three spectroscopy techniques can be combined in order to derive the structure of a sample compound.

IR gives information about the different types of bonds present in a compound. As different compounds may share the same bonds, IR is often used alongside other analysis techniques.

The empirical formula of an unknown compound is found to be $C_{2}H_{4}O$. Use the information below to determine the structure of the compound.

By combining this information, the actual structure can be determined: