Objects either remain at rest or in uniform motion unless acted on by a resultant force. This means that any object moving at constant velocity is either acted on by no forces or the forces acting upon it are balanced.

This states that the force is proportional to the mass multiplied by the acceleration:

$$ F = ma $$
Where $F$ is the force $(N)$, $m$ is the mass $(kg)$ and $a$ is the acceleration $(ms^-{1})$. This equation states that with a larger mass, a greater force is required in order to achieve the same acceleration and the more force applied, the greater the acceleration.

This states that if an object exerts a certain force on another object, then the other object applies an equal and opposite force.

Drag is a force which opposes the direction of motion of an object. It exists as air resistance for objects travelling through air, or as friction between the wheels and the road. Drag only makes an impact on a object under motion, therefore it is never able to make something move. It converts kinetic energy into heat.

Newton's second law can be applied to situations where two forces are acting in opposite directions. 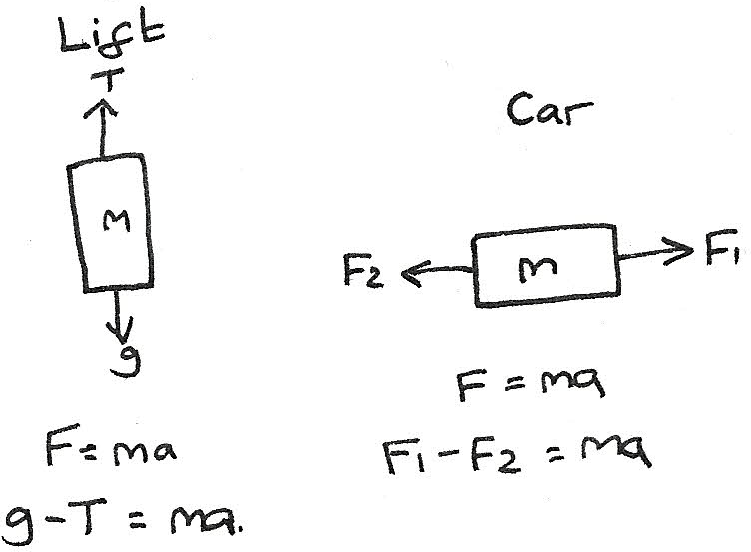 A car of mass 1200kg travelling down a road has a driving force of 200N and undergoes a friction force of 50N. What is the acceleration of the car?

This is the point at which the forwards force is equal to the frictional force. When this occurs, the acceleration becomes zero as it has reached its maximum speed.

Terminal Velocity for a Car

Terminal Velocity of a Skydiver

Principle of Conservation of Energy

This principle states that energy cannot be created or destroyed. Instead it is converted between different forms.

Work done is the energy converted from one form to another. It can be calculated by:

Where $W$ is the work done in joules, $F$ is the force in newtons and $d$ is the distance in metres. On a force-distance graph, the work done can be calculated by finding the area under the curve.

Kinetic Energy is the energy of an object as a result of its motion. It is dependant on the mass of the object and the velocity. It can be calculated by using:

This is the energy due to the position of an object. It can be calculated by using:

Where $F$ is the driving force and $v$ is the velocity. This is because the velocity is the distance moved per second and power is defined as the work done per second.

Useful energy is the energy outputted from a system for a certain use. In most systems energy is wasted as it is converted to heat energy through friction. It can be calculated by: