Electromagnetic induction occurs when a conductor cuts across the field lines of a magnetic field, inducing an emf in the wire. In a complete circuit this induces a current which can be used for: 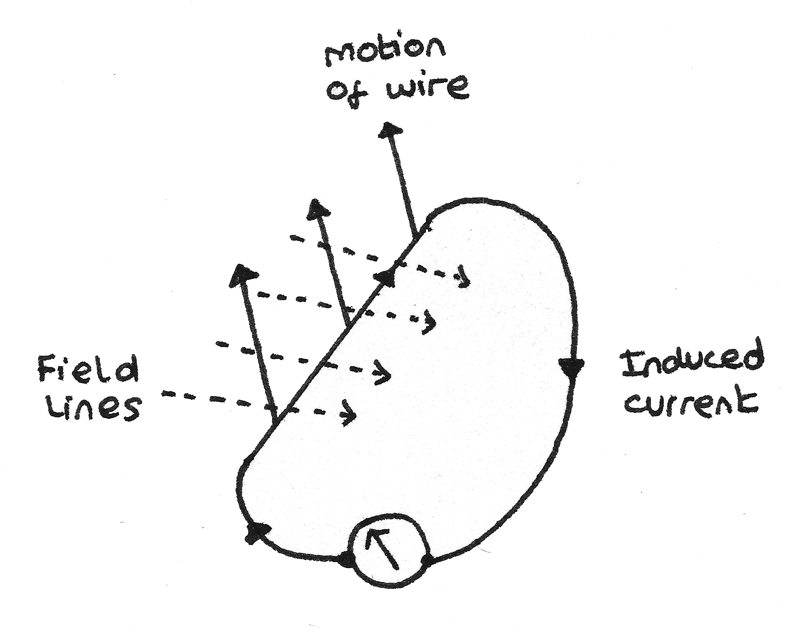 Fleming's right hand rule shows how the applied force, field lines and induced current all act perpendicular to each other. 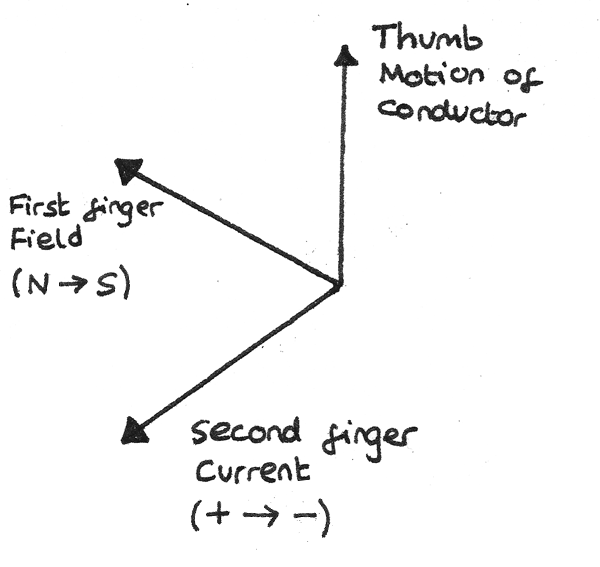 The diagram below shows a conductor of length $l$ which is part of a complete circuit cutting through the lines of a magnetic field of flux density $B$. The crosses indicate the magnetic field is acting into the plane of the diagram. 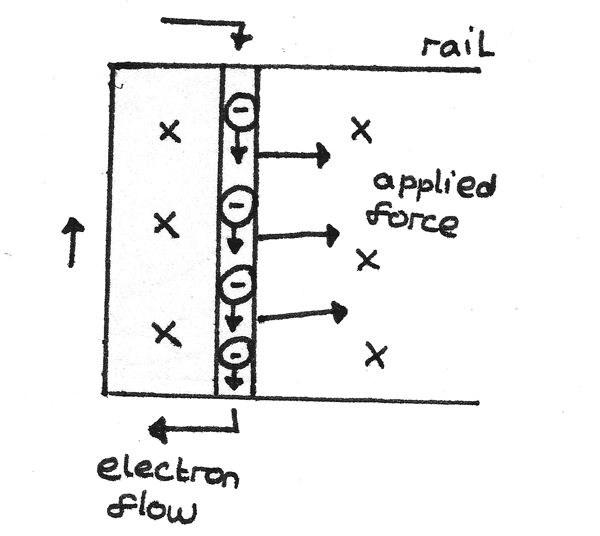 In moving the conductor through the magnetic field, an emf $\epsilon$ is induced and an induced current $I$ flows around the circuit. When using Fleming’s Right Hand rule to determine the direction of the current, it is important to understand that the direction of electron flow is opposite to the direction of flow of conventional current.

As the area that the conductor passes through is equal to $l\Delta s$:

This equation shows that in order to increase the induced emf, a stronger magnet or larger conductor could be used. The velocity of the conductor could also be increased.

In the case that the field lines are not acting perpendicular to the plane of the coil such as in the diagram below: 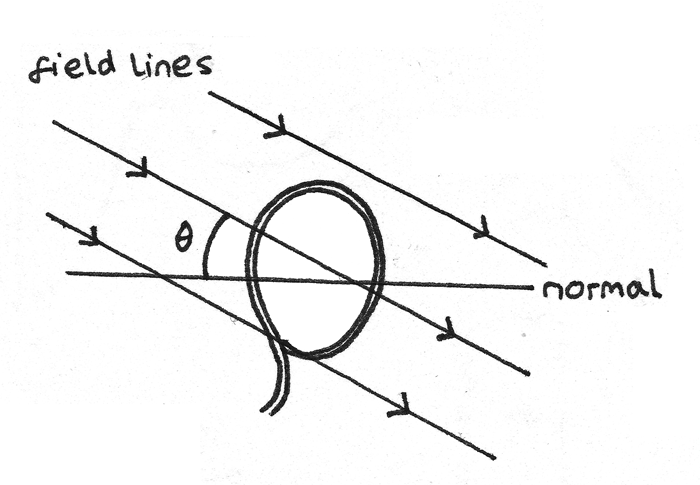 Where $\theta$ is the angle between the field lines and the normal to the plane of the coil.

Faraday’s Law states that the induced emf in a circuit is equal to the rate of change of flux linkage:
$$ \epsilon = -N\frac{\Delta \phi}{\Delta t} $$
The minus sign represents the direction of the induced emf.

Lenz’s law states that the direction of the induced current is always such as to oppose the change that caused the current. 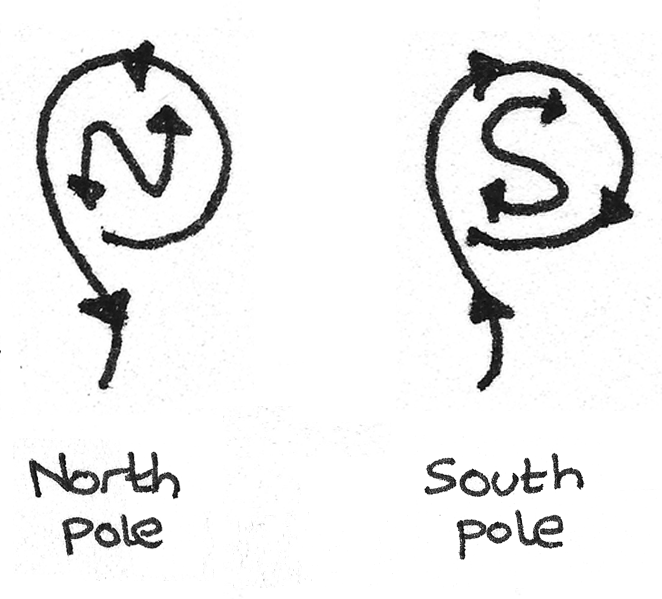 This opposition of the applied force is due to the conservation of energy principle. The energy used to pull a conductor through a magnetic field against the resistive force of the induced magnetic field is what produces the induced current.

AC generators produce an alternating current through the rotation of a coil in a uniform magnetic field. Brushes and slip rings connect a rotating shaft to a fixed complete circuit. At an instant when the angle $\theta$ is the angle between the coil and the normal to the field lines: 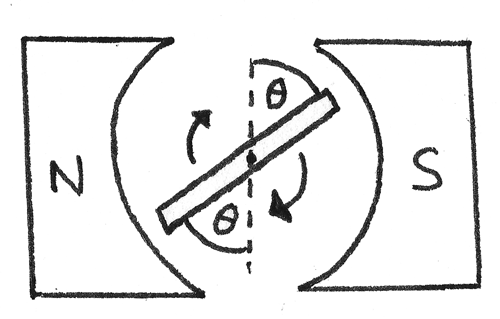 The flux linkage through the coil is:

The orientation of the coil over a full cycle of time $T$ is shown below.

$$ N\phi = BAN\cos \omega t $$
Where $\omega$ is the angular velocity of the rotating coil. The graph below shows the flux linkage over time.

Where the peak emf $\epsilon_{0}$ is known, for a coil spinning at a frequency $f$ the induced emf is:

This equation shows that the induced emf is at a maximum when the coil is in line with the field lines. This is because for a rotating coil, the rate of change of flux linkage is greatest when the flux linkage is zero. 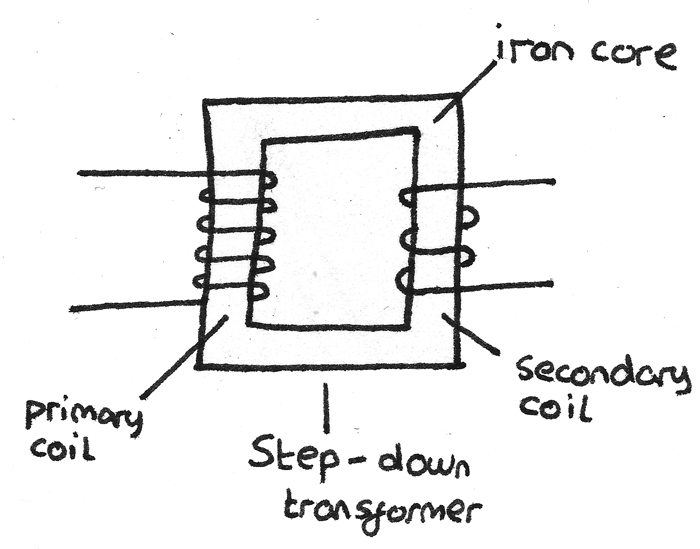 In an ideal transfomer, all the magnetic flux produced by the primary coil passes through to the secondary coil so the pd across the secondary coil is:
$$ V_{s} = N_{s}\frac{\Delta \Phi}{\Delta t} $$
As the coils share the same magnetic field, the rate of change of flux will be equal, so the two equations can be combined to form the transformer rule:
$$ \frac{V_{s}}{V_{p}} = \frac{N_{s}}{N_{p}} $$

Transformers tend to have an efficiency close to 100% due to:

Transformers are used for the transmission of electricity with a high efficiency over long distances. In a wire, the power lost due to the resistance is: