The principle of conservation of linear momentum states for a system of interacting objects, the total momentum remains constant, provided no external resultant forces act on the system.

Using the principle of conservation of momentum it is possible to calculate the velocities of colliding objects with known masses:

A fast moving heavy object collides with a slower lighter object. After the collision, the two objects join together.

The impulse of a collision is defined as the change in momentum. It is a vector quantity. By rearranging Newton's second law, $F=\frac{mv - mu}{t}$, the impulse can be defined as:

Where $Ft$ is the impulse measured in $Ns$, $m$ is the mass of the object, $v$ is the final velocity and $u$ is the initial velocity.

On a force-time graph, the impulse can be determined by calculating the area under the curve. 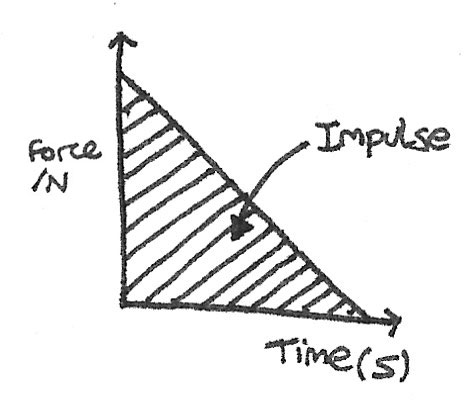