Ernest Rutherford conducted an experiment where a narrow beam of alpha particles were directed towards a thin gold foil. The apparatus he used is shown below. 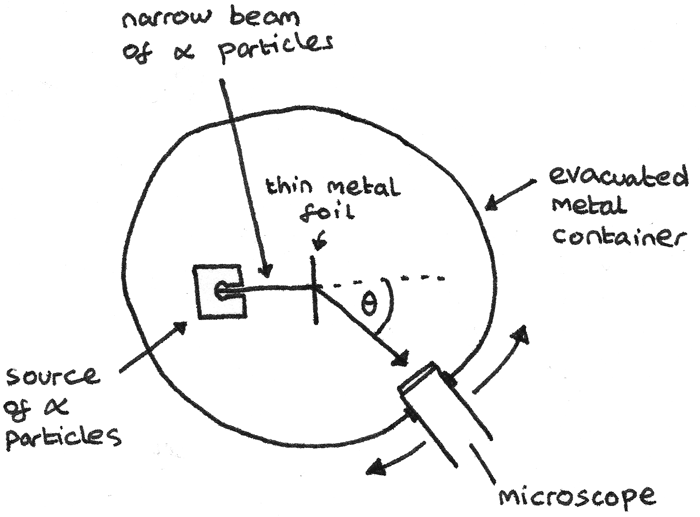 From this experiment he made some observations:

From these observations, Rutherford interpreted that:

Rutherford conducted more experiments to determine the type of radiation emitted when a nucleus decays. Three types of radiation were found to be commonly emitted:

The table below gives a comparison of the three types of radiation:

The range of different types of radiation can be determined using a Geiger tube and a counter. A Geiger–Müller tube is an instrument used for the detection of ionised particles. The count rate is the number of ionised particles detected by the tube per unit time. The apparatus is shown below:

$$ I = \frac{k}{x^{2}} $$
Where $I$ is the relative intensity of the source at distance $x$ from the source and $k$ is a constant. This means that if the source is moved twice the distance away from the detector, the count rate is reduced to a quarter of its original value.

In our everyday lives we are exposed to low levels of radiation which contribute to an overall dose of background radiation. Some contributors include:

The half life of a radioactive isotope is the time taken for the mass of the isotope to decrease to half of its original mass.

Where $N$ is the number of radioactive nuclei and $\lambda$ is the decay constant ($s^{-1}$). As activity is the rate of decay of a radioactive isotope, it follows that:

This means that an isotope with a small decay constant has a smaller probability of decaying per second therefore a longer half life.

As the mass of radioactive isotope decays exponentially, it can be represented by an exponentially decreasing graph. 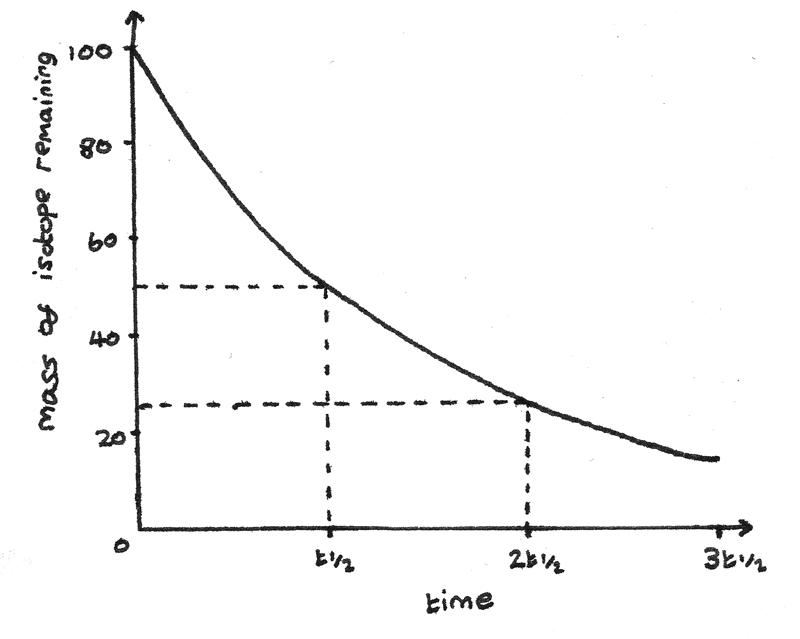 This graph has this equation:

Where $N_{0}$ is the initial number of nuclei, $\lambda$ is the decay constant and $t$ is the time in seconds since the decay started.

By substituting in the formula for activity it can also be shown that:

Radioactive isotopes have many uses in everyday applications, some of which are described below.

The radioactivity of carbon-14 is used to date organic materials. $_{ 6 }^{ 14 }{ C }$ is formed in the upper atmosphere by cosmic rays knocking out neutrons from nuclei which then interact with nitrogen atoms.

During the life of a plant, the plant continuously takes in carbon-14 and maintains a constant level. Once the plant dies, carbon-14 is no longer taken in and the built up levels start to decay. As the half life of carbon-14 is known, it is possible to determine the age of an organic material by comparing the number of nuclei in a living and a dead sample.

A piece of wood taken from an axe handle found on an archaeological site has $0.375$ times as many carbon-14 atoms as an equal mass of living wood. The half life of carbon-14 is $5740$ years. Calculate the age of the axe handle.

A nucleus is under the influence of the attractive strong nuclear force acting on all nucleons and the repulsive electrostatic force acting between protons. The ratio of protons to neutrons in a nucleus is important in determining the stability of a compound. 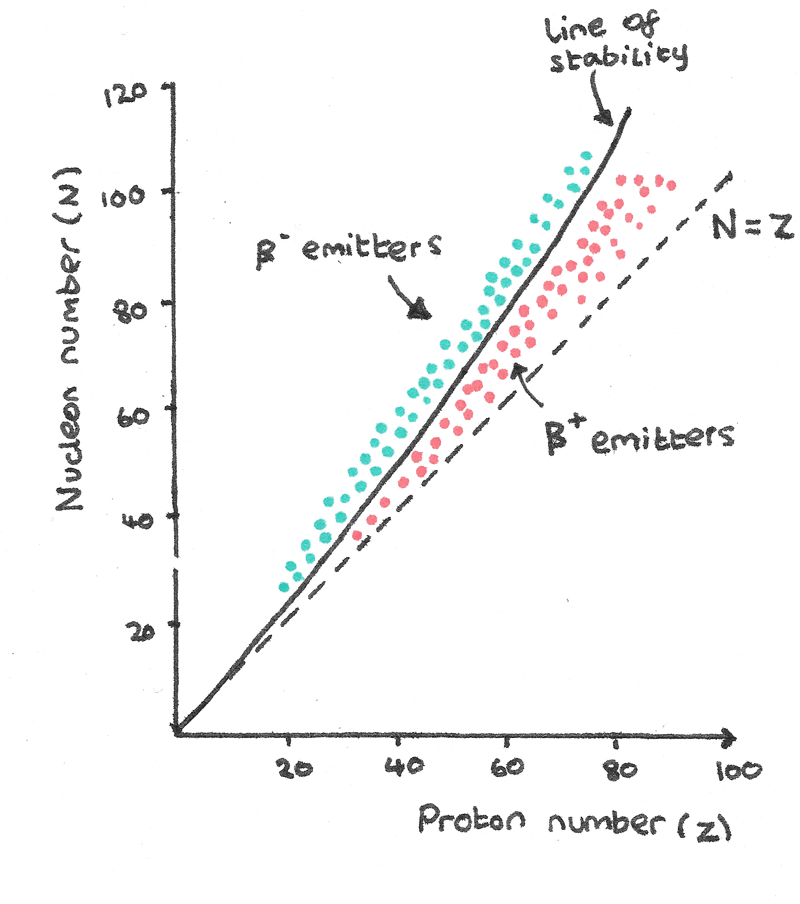 In very heavy nuclei containing more than 82 protons, an alpha particle can be emitted, decreasing the proton number by two and nucleon number by four.

In alpha emission, all the particles from a given source have the same kinetic energy as the nucleus and the $\alpha$ particles move apart with equal and opposite momentum.

After emitting an $\alpha$ or $\beta$ particle, the daughter nucleus may be in an excited state and have excess energy. In de-exciting from an excited state to the ground state, $\gamma$ photons are released with energy equal to the difference in energy levels.

Unstable nuclei often decay to form a different radioactive isotope. This can result in a series of unstable nuclei before a stable isotope is formed. For example, the uranium isotope $_{ 92 }^{ 238 }{ U }$ has a half life of 4500 million years and decays through a series outlined below:

Several techniques can be used to find an approximation for the radius of a nucleus.

When an $\alpha$ particle is fired at a gold nucleus and is repelled back through an angle of exactly $180°$, there is a point where the $\alpha$ particle would have stopped a short distance from the nucleus. Due to the conservation of energy, assuming no energy loss, the electrostatic potential energy will be equal to its initial kinetic energy.

When a thin beam of high energy electrons is directed towards a thin metal foil, the electrons are diffracted by the nuclei of the metal. This diffraction occurs because the de Broglie wavelength of the electrons is similar to the diameter of the nuclei. A detector can be used to measure the intensity of electrons at different angles from the zero-order. 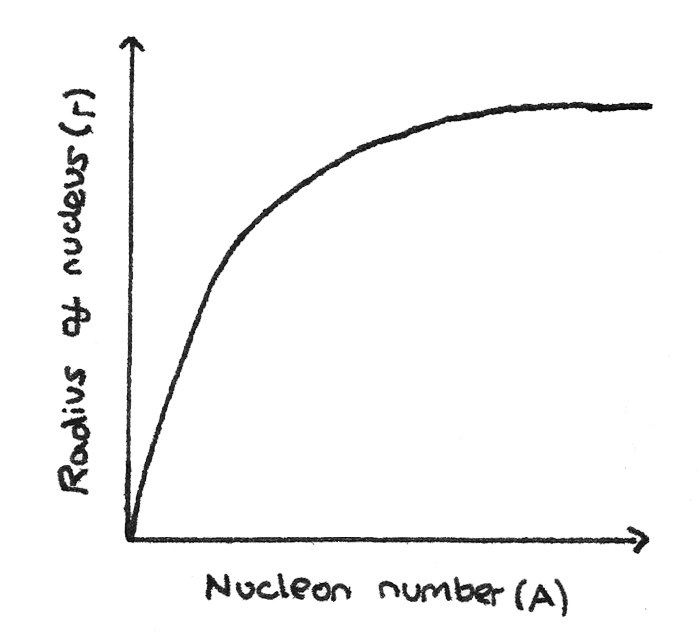 Calculate the density of a carbon-12 nucleus.

Repeating this for other elements would give the same nuclear density.

As the nuclear density is so large, a cubic millimetre of nuclear matter would have a mass of around 340 million kilograms. This shows that the majority of an atom must be empty space.