Where $E$ is the energy, $m$ is the mass and $c$ is the speed of light in free space. Reactions on a nuclear and sub-nuclear scale often involve changes in mass, therefore changes in energy. When a nucleus splits into its constituent nucleons, energy is released.

The binding energy is the work that must be done in order to separate a nucleus into its constituent neutrons and protons.

The mass defect of a nucleus is the difference between the total mass of the separated nucleons and the mass of the combined nucleus. This mass defect is shown in radioactive decays:

First the mass of the atom without the electrons and the total sum of the nucleons need to be calculated. 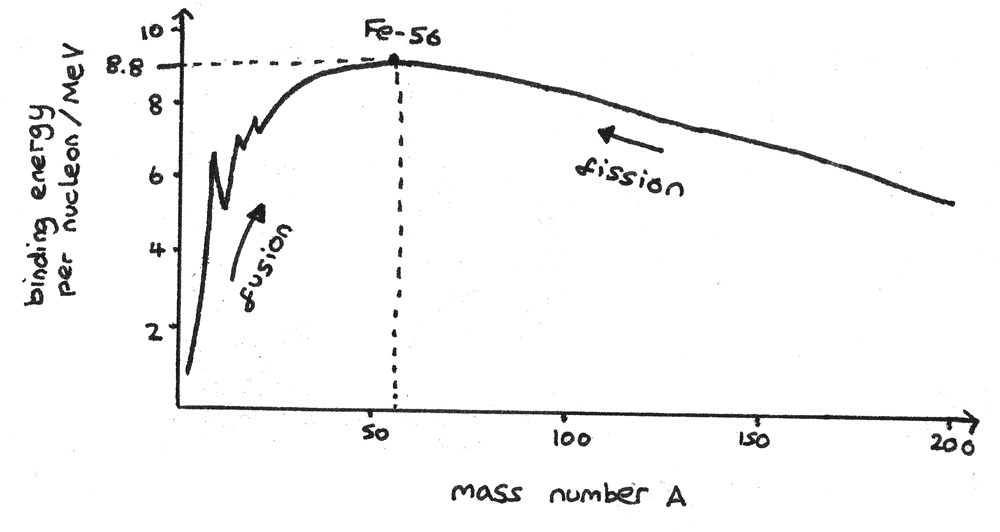 The region around the peak of this graph are the most stable isotopes of iron ($Fe$). Nuclear reactions release energy through increasing the binding energy per nucleon:

Nuclear fusion is the combining of two light nuclei to form a heavier, more stable nucleus. In order to overcome the electrostatic repulsion between two positively charged nuclei and get close enough for the strong force to hold them together, they must be collided at high speed.

An example of a fusion reaction is the fusion of hydrogen isotopes to form helium. This reaction occurs in the Sun, as the high temperatures enable the nuclei to collide at high speeds.

Nuclear fission is the splitting of a heavy unstable nucleus into two lighter, more stable nuclei. This can happen spontaneously in nature, or can be induced through the bombardment of slow moving neutrons. This is called induced fission.

In induced fission, a uranium-235 nucleus ($ _{92}^{235}{U}$) is bombarded with slow moving neutrons, called thermal neutrons. A large nucleus then splits into two approximately equal fragments. Below is an example of a fission reaction:

As shown in this reaction, further neutrons are released. These neutrons are able to induce fission in other heavy nuclei resulting in a chain reaction.

A nuclear reactor in a nuclear power station generates electricity through nuclear fission. Enriched uranium fuel rods rich in $_{92}^{235}{U}$ undergo fission reactions in a steady, constant chain reaction. These reactions produce heat which is used to boil water and turn turbines in order to generate electricity. 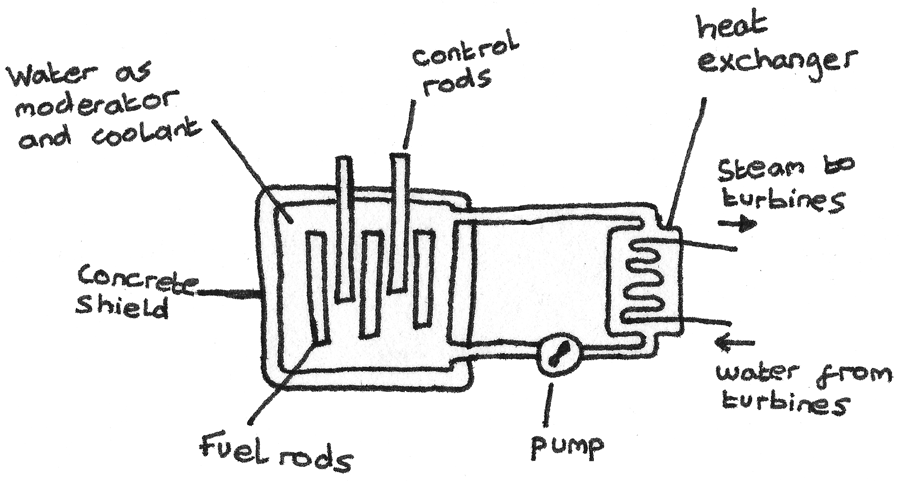 Waste from nuclear reactors may be highly radioactive and toxic so their handling and disposal require care to minimise danger to the environment and human health. Radioactive waste is categorised according to its nuclear activity.