An atom is the smallest particle of an element that retains its chemical properties. Only six elements, known as noble gases are able to exist naturally as single unbounded atoms:

In the atoms of a noble gas:

The tendency to acquire a noble gas configuration is known as the Octet Rule.

Elements not in group 0 bond with other atoms in order to gain a full outer shell. The type of bonding that occurs depends on the atoms involved in the bond:

The sodium atoms have each lost an electron in order to gain a full outer shell. This results in a positive charge.

In the above example, only one bond is shown however in reality many ions are surrounded by many oppositely charged ions. These ions attract in all directions forming a giant ionic lattice.

A giant ionic lattice is a three dimensional structure of oppositely charged ions held together by strong ionic bonds. 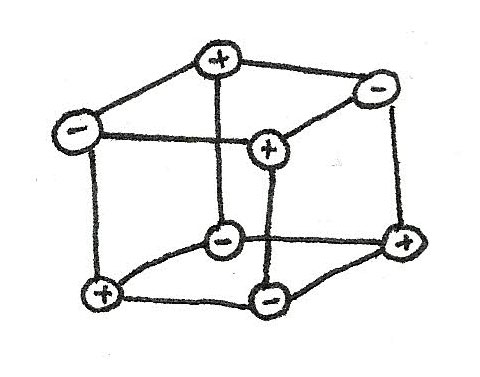 Ions and The Periodic Table

The charge of an ion of an element can be predicted from the position on the periodic table. The number of electrons in the outer shell can be found from the group the element is in. For example, lithium ($Li$):

Some of the noticeable patterns are shown below:

Groups of covalently bonded atoms can also lose or gain electrons to form ions. These are called molecular ions:

Although an ionic compound is made up of charged ions, the overall charge of a compound is 0. This means that ionic formulae can be predicted by looking at the charges.

For calcium chloride, the overall charge must be zero. It is known that it is comprised on $Ca^{2+}$ ions and $Cl^{-}$ ions. For the charge to add up to zero there must therefore be two chlorine atoms and one calcium atom: 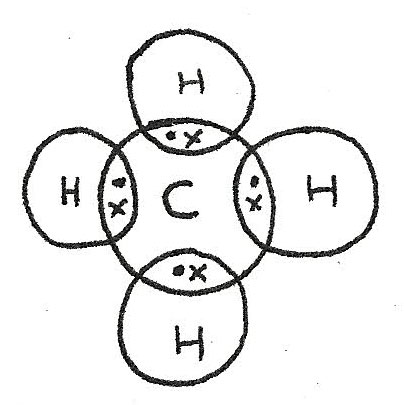 In order to form a full outer shell, the carbon atom bonds with four hydrogen atoms. The number of bonds that an atom makes depends on the number of electrons in the outer shell.

In some compounds, double bonds are formed which means that more than one pair of electrons are shared together.

Lone pairs are pairs of electrons that are not used for bonding. These lone pairs form concentrated regions of negative charge which can affect the electronegativity of the compound and the shape.

In dative covalent bonds, one of the bonded atoms supplies both of the shared electrons.

When covalent bonds form, unpaired electrons often pair up so that the bonding atoms obtain a noble gas configuration, obeying the octet rule. However, this is not always possible:

The physical shape of a molecule is determined by the number of electron pairs in the outer shell surrounding the central atom. This is due to the repulsion of the negatively charged electrons. Equal repulsion means that the bonded pairs push as far away from each other as possible.

Some molecules are shown below:

Lone pair of electrons are more electron-dense than a bonded pair. This means that the repulsion is greater, which reduces the bond angle by around 2.5°.

A double bond is classed as a single bonding region, meaning that the shape is the unchanged compared to a single bond.