This is where ethanol is made industrially by the catalytic conversion of ethene, $C_{2}H_{4}$ using steam in the presence of a phosphoric acid catalyst, ($H_{3}PO_{4}$). This reaction is carried out at high temperature and pressure.

This is a reversible reaction, so the conversion of ethene is incomplete with any unreacted gases recycled and passed through the reactor again.

This is where carbohydrates are converted into ethanol and carbon dioxide. The conditions for this are:

The physical properties of alcohols are influenced by their ability to form hydrogen bonds between $-OH$ groups of neighbouring molecules.

Hydrogen bonds are the strongest type of intermolecular forces. The relatively high melting and boiling points of alcohols are due to the presence of hydrogen bonds between the alcohol molecules.

The presence of hydrogen bonds result in them having a lower volatility than alkanes of similar mass. The boiling point of alcohols increase with longer chains.

Alcohols dissolve in water because hydrogen bonds form between the polar $-OH$ group of the alcohol and the water molecules.

Solubility decreases as the chain length increases. This is because a large part of the molecule is made up from a non-polar hydrocarbon chain. This chain is not able to form hydrogen bonds with the water molecules.

Alcohols can be classed as primary, secondary or tertiary alcohols depending on the number of allyl groups attached to the carbon carrying the alcohol group.

The $-OH$ atom is attached to a carbon with no bonded allyl groups. 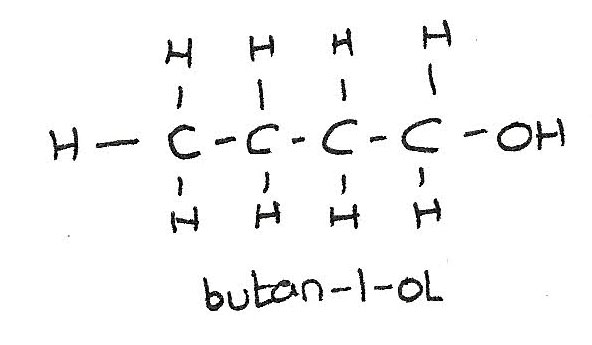 The $-OH$ group is attached to a carbon atom which is bonded to two alkyl groups. 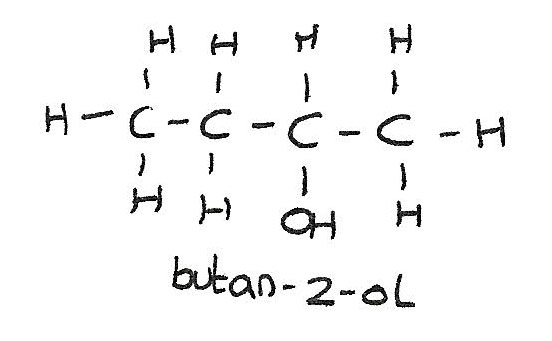 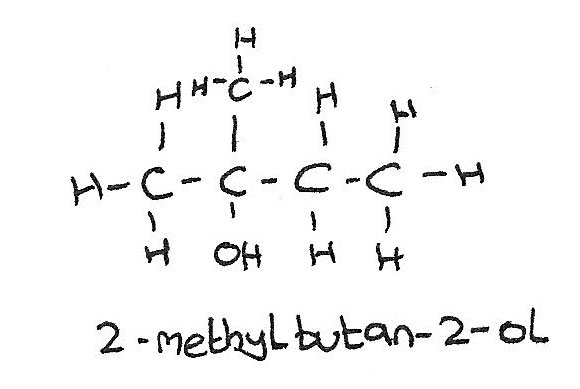 During the reaction, the acidified potassium dichromate changes colour from orange to green.

On stronger heating under reflux and an excess of acidified potassium dichromate, alcohol is completely oxidised to form a carboxylic acid.
$$C_{3}H_{7}OH + 2[O] \rightarrow C_{2}H_{5}COOH + H_{2}O$$

When preparing aldehydes, it must be distilled off as it to formed. This prevents the further oxidisation to a carboxylic acid.

This is the continual boiling and condensing of a reaction mixture to ensure that the reaction takes place without the contents of the flask boiling dry.

An ester is formed when an alcohol is warmed with a carboxylic acid in the presence of an acid catalyst. In the reaction below, methanol reacts with propanoic acid to produce the ester methyl propanoate and water.

An alcohol can be dehydrated to form an alkene in the presence of an acid catalyst. This is an example of an elimination reaction. The alcohol is heated under reflux for 40 minutes.