Alkenes are unsaturated hydrocarbons with at least one $C=C$ double bond. Alkenes:

$CH_{2}=CH_{2}$ is one of the most important alkenes. It is obtained from the catalytic cracking of crude oil fractions. The $C=C$ double bond is the functional group in the alkene that is responsible for its reactions.
$$Cl_{2} \rightarrow Cl\cdot + Cl\cdot$$

Nature of the double bond

In alkenes, each carbon involved in the double bond: 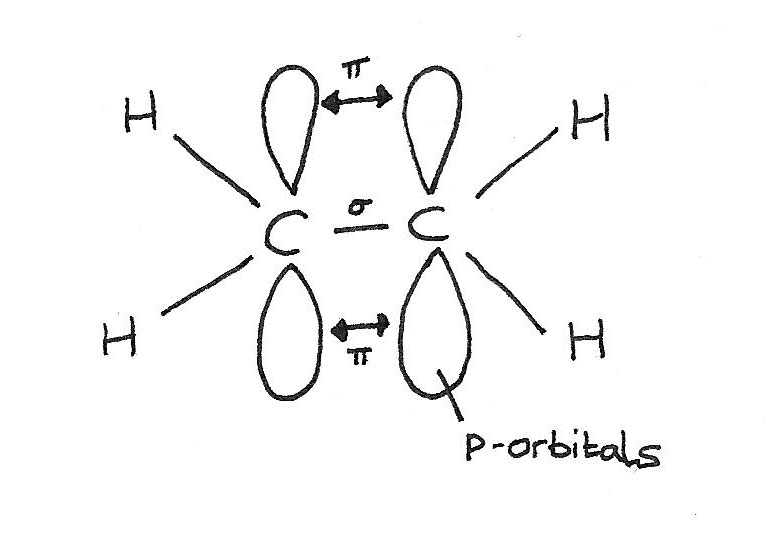 Shape of an alkene molecule

Alkenes react rapidly with halogens such as chlorine, bromine and iodine at room temperature. This reaction sometimes known as a halogenation reaction, forms a di-substituted halogenoalkane.
$$CH_{2}{=}CH_{2} + Cl_{2} \rightarrow CH_{2}ClCH_{2}Cl$$

A hydrogen halide can be added across the double bond of an alkene to produce a halogenoalkane. Halogen halides include $HCl$, $HBr$ and $HI$. At room temperature, hydrogen halides are gases and can be bubbled through liquid alkenes.
$$CH_{2}{=}CH_{2} + HBr \rightarrow CH_{3}CH_{2}Br$$

Unsymmetrical alkenes such as propene can form a mixture of organic products. This is because the atoms can be added at either side of the double bond.

The addition of steam to alkenes is one method of producing alcohols. This reaction is widely used in industry.

Hydrogen bromide, $HBr$ is a polar molecule. This is because bromine is more electronegative than hydrogen. This causes the dipole $H^{\delta+}{-}Br^{\delta-}$

The product of the reaction is a halogenalkane, in this case bromoethane. In the mechanism above, $HBr$ is the electrophile.

When $Br_{2(aq)}$ is added to an alkene the colour changes from orange to colourless. This colour change indicates that it has reacted with a alkene.