The naming of amines is based around the length of the longest alkyl chain connected to the nitrogen atom. Below are some examples of amines:

$$ CH_{3}(CH_{3}CH_{2}CH_{2})NH $$
This is N-methylpropylamine. The -propyl part comes from the longer three carbon chain while the -methyl part is from the other $CH_{3}$ group. The preceding N indicates that the methyl group is attached to the nitrogen atom.

$$(CH_{3 }CH_{2})_{2}CH_{3}CH_{2}CH_{2}N$$
This is N,N-diethylpropylamine. The -propyl part comes from the longer three carbon chain while the diethyl is from the two ethyl groups connected to the nitrogen atom.

Amine as Weak Base

Amines are weak bases. This is because a lone pair of electrons on the nitrogen atom can accept a proton ($H^{+}$). When the amine accepts the proton, a dative covalent bond is formed between the amine and the proton.

Aliphatic amines can be prepared by warming halogenoalkanes with an excess of ammonia, using ethanol as a solvent.

As the propylamine also has a lone pair of electrons on the nitrogen atom, further nucleophilic substitution can occur, forming a secondary amine. The ammonia acts as a nucleophile and attacks the $\delta +$ carbon atom in the carbon-halogen bond.

To minimise the further substitution, a very large excess of ammonia can be used.

To prepare an aromatic amine from benzene, the benzene ring must first be nitrated to form nitrobenzene. Nitrobenzene is used in the synthesis of dyes and in pharmaceutical products. This is done by reacting benzene with concentrated nitric acid. A catalyst of concentrated sulphuric acid is used at a temperature of 50°C.

Aromatic amines can be used in the production of industrial dyes. It is performed in two stages: diazotisation and coupling.

The nitrous acid reacts with an aromatic amine to form a diazonium salt. In this case, benzenediazonium chloride is produced:

The diazonium salt can then be reacted with another aromatic compound in order to produce an azo compound. An azo compound is a compound containing the azo functional group, $-N=N-$.

In the reaction below, the benzenediazonium chloride is reacted with phenol and sodium hydroxide. The diazonium salt acts as an electrophile. This reaction is performed under alkaline conditions.

Amino acids are compounds which contain both an amine group ($-NH_{2}$) and a carboxylic acid group ($-COOH$). They are important in the human body as they are building blocks for proteins and peptides. They also act as enzymes and antibodies.

$\alpha$-amino acids have a basic amine group and an acidic carboxyl group bonded to the same carbon atom. The general formula is $RCH(HN_{2})COOH$. The body has 20 amino acids that can be arranged to form proteins. The simplest $\alpha$-amino acid is glycine which has a hydrogen atom as the $-R$ group. 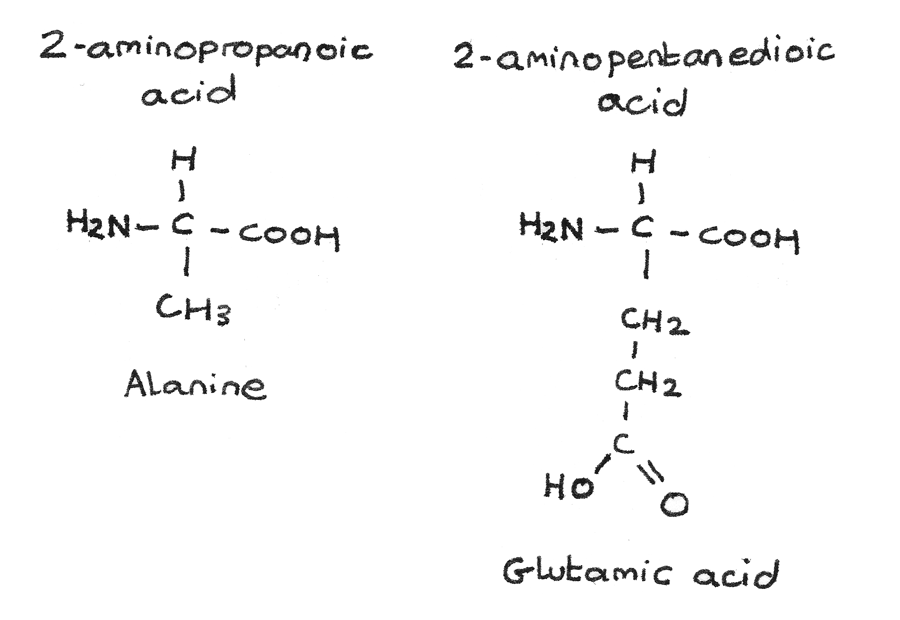 The acidic carboxyl group and the basic amine group in an amino acid can interact with each other to form an internal salt known as a zwitterion. In this process: 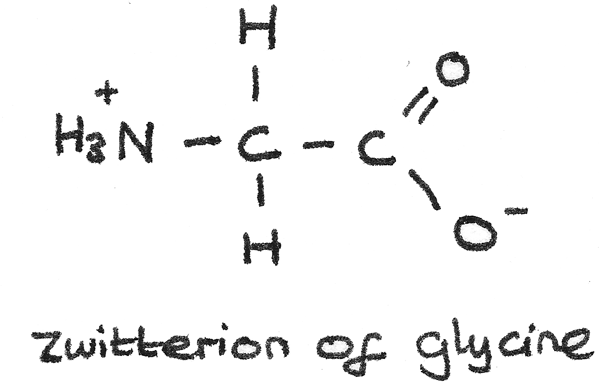 Acid and Base Properties

Amino acids are amphoteric, meaning they can react as an acid or a base.

A peptide is a compound containing two or more amino acids joined by a peptide bond. 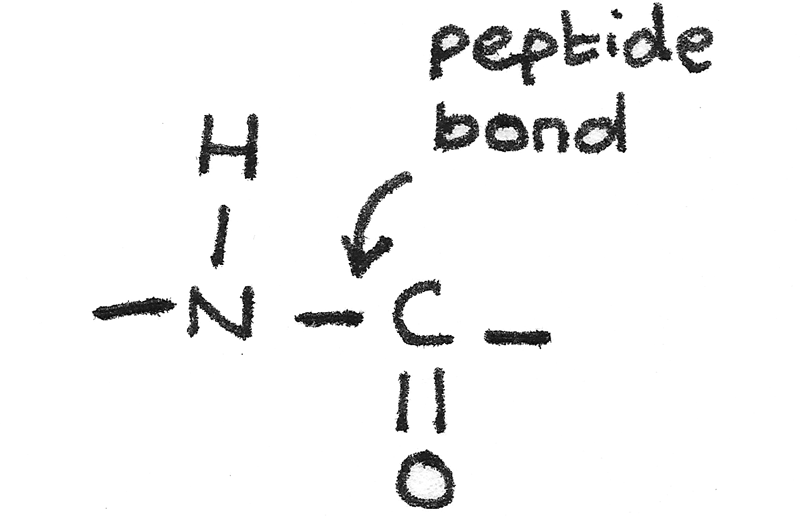 When two amino acids join together, a dipeptide is formed through the elimination of water in a condensation reaction.

It is also possible to form a dipeptide by reacting two of the same amino acids together. The amine group on one of the molecules reacts with the carboxyl group on the other.

Polypeptides can be hydrolysed using aqueous acid. In this reaction the peptide bond is broken forming two positively charged amino acids. This reaction is traditionally carried out by heating under reflux with $6~mol~dm^{-3}$ hydrochloric acid for 24 hours.

Polypeptides can be broken down through alkaline hydrolysis. A solution of sodium hydroxide can be used just above 100° C. In this reaction the polypeptide is broken down into salts.

In the reaction below a long amino acid chain is broken through alkaline hydrolysis.