Stereoisomers are isometric molecules that have the same structural formula but have a different arrangement of atoms in space. E/Z isomerism is one form of stereoisomerism where atoms can have different orientations around a double bond.

Optical isomerism is another type of stereoisomerism, named due to how the isomers affect plane polarised light. It arises in organic molecules that contain a carbon atom bonded to four different atoms or groups.

A chiral carbon is a carbon atom attached to four different atoms or groups of atoms.

Two non-superimposable mirror image arrangements of atoms are possible if a molecule has a chiral centre in its structure. For each chiral carbon there are two optical isomers. 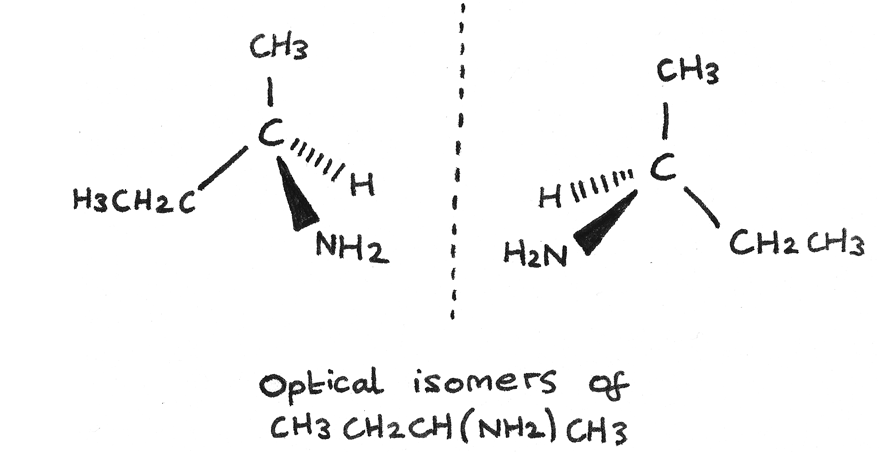 All $\alpha$ amino acids (apart from glycine and 2-aminoethanoic acid) are optical isomers with the $-COOH$ group, $-NH_{2}$ group, and $-R$ group all connected to the same chiral carbon.

A mixture containing equal amounts of each optical isomer is known as a racemic mixture. Often in nature only one of the optical isomers is synthesised naturally and is able to interact with an enzyme.

Enantiomers must be considered in the production of drugs. The stereoisomerism determines the pharmacological activity of a drug. Using only one optical isomer:

Optical isomers usually have similar chemical properties such as melting point, boiling point and solubility, so separation can be difficult. Modern chiral synthesis techniques used in the separation of isomers include: