A polyester is a polymer where the monomers are held together through ester linkages. In a polyester, monomers must have a carboxyl group ($-COOH$) and a hydroxyl group ($-OH$). There are two types of polyester.

With this method, one monomer is a dicarboxylic acid with two $-COOH$ groups while the other is a diol with two $-OH$ groups. The general formation is shown below:

An example of this condensation reaction is the formation of Terylene which is made from the monomers ethane-1,2-diol and benzene-1,4-dicarboxylic acid.

One type of Monomer Unit

Polyesters can also be formed from hydroxycarboxylic acids, which contain both the carboxyl group, $-COOH$ and a hydroxyl group, $-OH$. The general formation is shown below:

An example of this type of condensation reaction is the formation of polylactic acid (PLA) from the monomer unit 2-hydroxypropanoic acid. During this polymerisation, an ester bond forms between the carboxyl group on one unit and a hydroxyl group on another unit. In forming this ester linkage, water is eliminated.

An example of this type of condensation polymerisation is the formation of Nylon-6,6. This is made from the monomers 1,6-diaminohexane and hexanedioic acid. 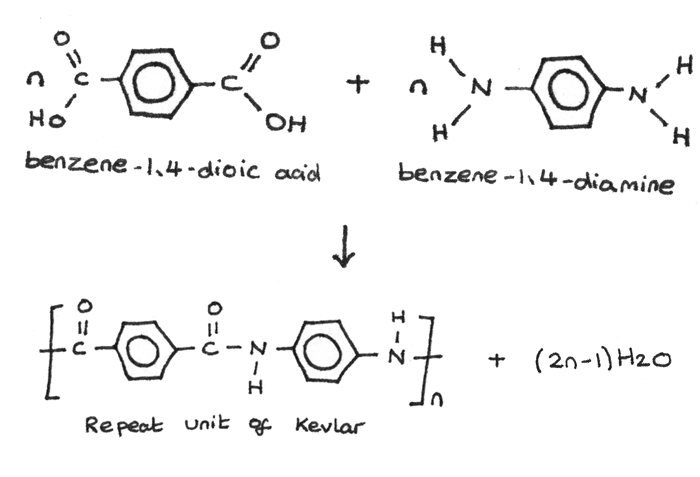 One type of Monomer Unit

Polyamides can also be formed from amino acids, which contain both the amine group ($-NH_{2}$) and a carboxyl group ($-COOH$). Polypeptides and proteins are polyamides formed from one type of monomer unit. The general formation is shown below:

The table below shows a comparison between addition and condensation polymers.

Polyesters can be hydrolysed under acidic or basic conditions.

Polyesters are readily hydrolysed by hot aqueous alkalis, such as sodium hydroxide. Each ester linkage is hydrolysed to a carboxylate salt ($-COO^{-}Na^{+}$) and a hydroxyl group ($-OH$).

In a much slower reaction, polyesters can be hydrolysed by hot aqueous acids, such as aqueous hydrochloric acid. Each ester linkage is hydrolysed to a carboxyl group ($-COOH$) and a hydroxyl group ($-OH$).

Polyamides can be hydrolysed under acidic or basic conditions.

Polyamides can be hydrolysed with hot aqueous alkalis, such as sodium hydroxide. With base hydrolysis, the sodium salt of the dicarboxylic acid and a diamine are both formed.

Polyamides can also be hydrolysed with hot aqueous acids, such as aqueous hydrochloric acid. With acid hydrolysis, a dicarboxylic acid and an ammonium salt of the diamine are produced.

Growing environmental concerns, customer demand and the increasing cost of fossil fuels had led to the development of renewable and sustainable polymers for consumer use. Such products include biodegradable carrier bags and packaging.

Biodegradable polymers have bonds which will readily undergo hydrolysis allowing for easier breakdown of the polymer. Examples include:

When exposed to sunlight, photodegradable polymers are designed to become weak and brittle. They are made by blending a polymer with light sensitive additives which catalyse the breakdown. Alternatively, carbonyl bonds ($C=O$) can be incorporated into the polymer which absorb energy and break down in prolonged sunlight. These polymers convert into waxy compounds when exposed to light before turning into carbon dioxide and water.