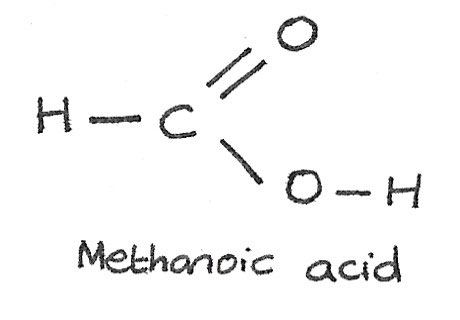 Short chain carboxylic acids are very soluble due to the polar $C=O$ and $O-H$ bonds which are able to form hydrogen bonds with the water molecules. As the number of carbon atoms increases, the solubility decreases as the length of the non-polar hydrocarbon chain increases.

Carboxylic acids are weak acids compared with nitric, sulfuric and hydrochloric acids. They are acidic due to the ability to donate the hydrogen atom in the $-COOH$ group. Salts formed from carboxylic acids are called carboxylates.

When forming these equations, it is important to consider the charge on the metal ion upon reacting with the acid. The magnesium ion has a positive charge of $\text{2+}$ while the carboxylate ion has a charge of $\text{1-}$. The equation must be balanced in order to balance these charges.

Carboxylic acids react with aqueous bases such as metal hydroxides to form a salt and water.

Carboxylic acids react with aqueous carbonates to form a salt, water and carbon dioxide. Fizzing will be visible due to the release of carbon dioxide.

An ester compound is derived from a carboxylic acid, by replacing the hydrogen atom in the $-COOH$ group with a hydrocarbon chain. 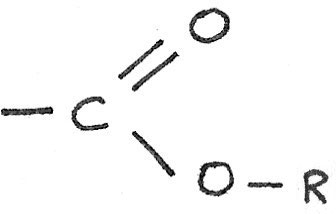 Esters can be used as solvents, flavourings in foods and as perfumes.

Esters can be formed by reacting a carboxylic acid with an alcohol in the presence of a concentrated sulphuric acid catalyst. An example of an esterification reaction is shown below:

The hydrolysis of esters is the reverse reaction of esterification, where there is a chemical breakdown of the ester with water. It occurs with aqueous acids or aqueous alkalis.

In this reaction, the ester is heated under reflux with dilute hydrochloric acid. The ester reacts with the water, with the acid acting as a catalyst. A carboxylic acid and an alcohol is formed from the ester.

Esters can also be hydrolysed under alkaline conditions, such as with aqueous sodium hydroxide or aqueous potassium hydroxide. This is a non-reversible reaction, which forms a carboxylate salt and an alcohol. This reaction can be called saponification and is used in the production of soaps.