The refractive index, which is the ratio of the velocity of light in a medium compared to in a vacuum can be determined by measuring the angle of incidence and refraction: 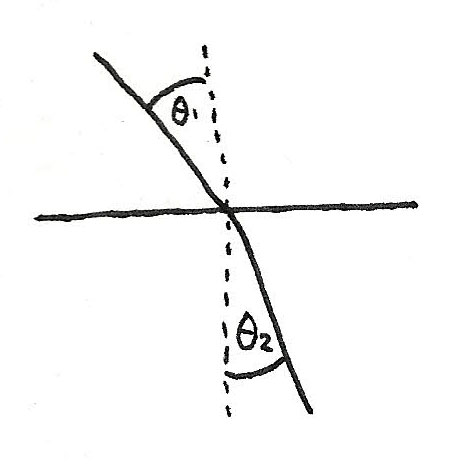 Refraction occurs due to the difference of the speed of light in each substance. When refraction occurs, the frequency doesn't change, although the wavelength and speed of the wave changes.

When light passes from one substance to another substance, the speed of light in each substance can be calculated by using: 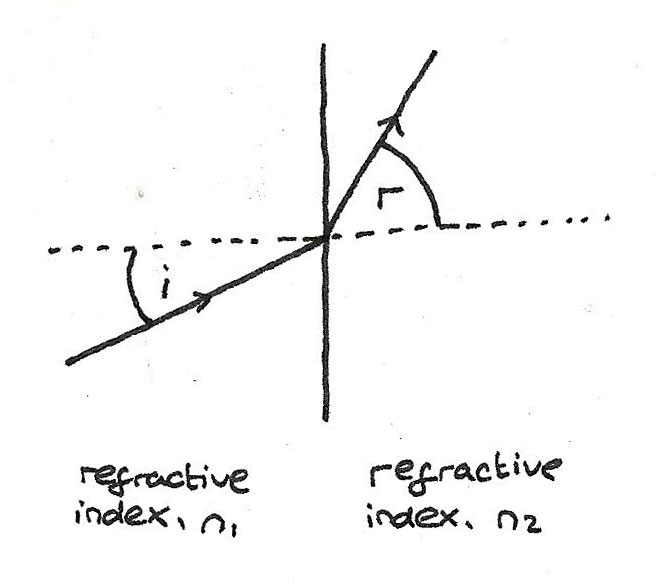 By rearranging, multiplying both sides by the speed of light in a vacuum and substituting in the refractive indexes gives:

When the angle of incidence reaches a certain angle, the light refracts along the boundary, before reflecting as the angle is increased. This is known as the critical angle. Total internal reflection can only occur if:

The critical angle $i_{c}$, can be calculated by using the following equation:

This principle is what is used in optical fibres, to transmit information. The fibres are lined with cladding to prevent crossover of signals. In addition, the core is very narrow in order to prevent multi path dispersion, where due to the reflected light taking longer than the direct wave, the signal is received twice. 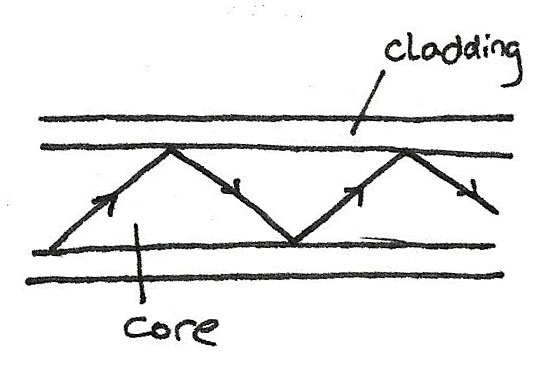 To observe interference and the wave properties of light, two closely spaced parallel slits can be illuminated by a single light source. The two slits acts as coherent sources, which means they both emit light of the same frequency with the same phase difference. When this occurs, interference occurs and alternative light and dark fringes known as Young's fringes are formed.

The fringes are formed due to the interference of light:

The fringe separation can be calculated by using the equation:
$$ w = \frac{\lambda D}{s} $$

Where $w$ is the fringe separation, $\lambda$ is the wavelength, $D$ is the distance from the slits to the screen, and $s$ is the spacing between slits.

In the double slit experiment, the fringe separation depends on the wavelength of the light used. This means that when white light is used, each colour component produces it's own pattern.

Light from a filament light or from the sun are composed of the colours of the spectrum which without a filter, produce a spectrum of fringes.

Laser light is a monochromatic light source which can be used as a coherent source of light unlike a filament bulb. The issue with laser lights is that it can be dangerous if shined towards the eyes.

When light passes through a gap, diffraction occurs where the wave spreads out. Diffracted waves spread out more if:

Diffraction of light can be shown by shining a parallel beam of light at a single slit. The diffracted light produces a pattern of fringes on a white screen. The graph below shows the intensity of the light compared to the position on the screen. 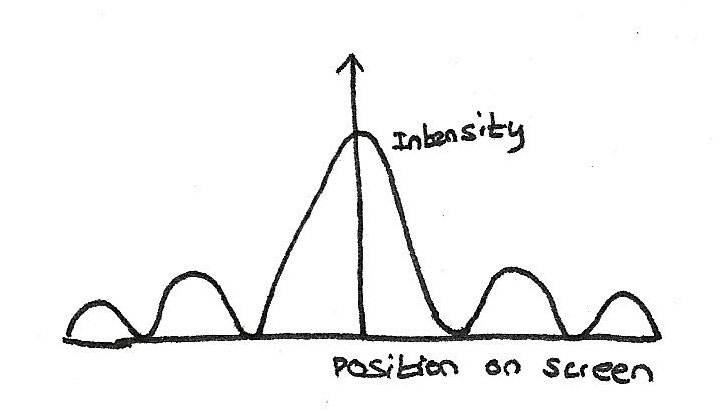 If the single slit pattern is observed:

A diffraction grating consists of a plate with many closely spaced parallel slits. When a monochromatic light is shined through the grating, the light only travels in certain directions only as:

The central, zero order beam is at the same direction as the incident beam. The other beams are of increasing order. The angle of diffraction between each transmitted beam and the central beam increases if:

An equation concerning the order the beams is:
$$ d\sin \theta = n\lambda $$

Where $d$ is the spacing between adjacent slits, $sin \theta$ is the sine of the angle of diffraction, $n$ is the order of the beam and $\lambda$ is the wavelength of the wave.