An electric field is a region around a charged particle where a force is exerted on other charged objects. Electric charge $Q$, is measured in coulombs ($C$), and can either be positive or negative.

The electric field strength, $E$, at a point in a field is defined as the force per unit charge exerted on a positive test charge placed at that point. The unit of $E$ is the newton per coulomb ($NC^{-1}$). This is a vector quantity acting in the direction that the positive charge would move.

Where $F$ is the force in newtons and $Q$ is the charge in coulombs.

Where $F$ is the force in newtons, $Q_{1}$ and $Q_{2}$ are the charges of the objects, $\epsilon_{0}$ is a constant known as the permittivity of free space and $r$ is the distance between the objects.

Where $V$ is the potential difference in volts, and $d$ is the separation in metres.​

Electric potential is defined as the electrical potential energy per unit charge at a point in a field. It is a scalar quantity and is measured in $JC^{-1}$. It can be calculated using:

The unit of electric potential is volts ($V$). The potential at a point in a field is the work done per coulomb to move a positively charged particle from infinity to that point. It can also be calculated by:

Where $Q$ is the charge in coulombs, $\epsilon_{0}$ is the permittivity of free space and $r$ is the separation between the centres of the charge.

Equipotentials are points of equal potential within a field. For a uniform field, the equipotentials are equally spaced lines between the plates. In a radial field, these are circular lines with increasing separation as the distance away from the centre increases. 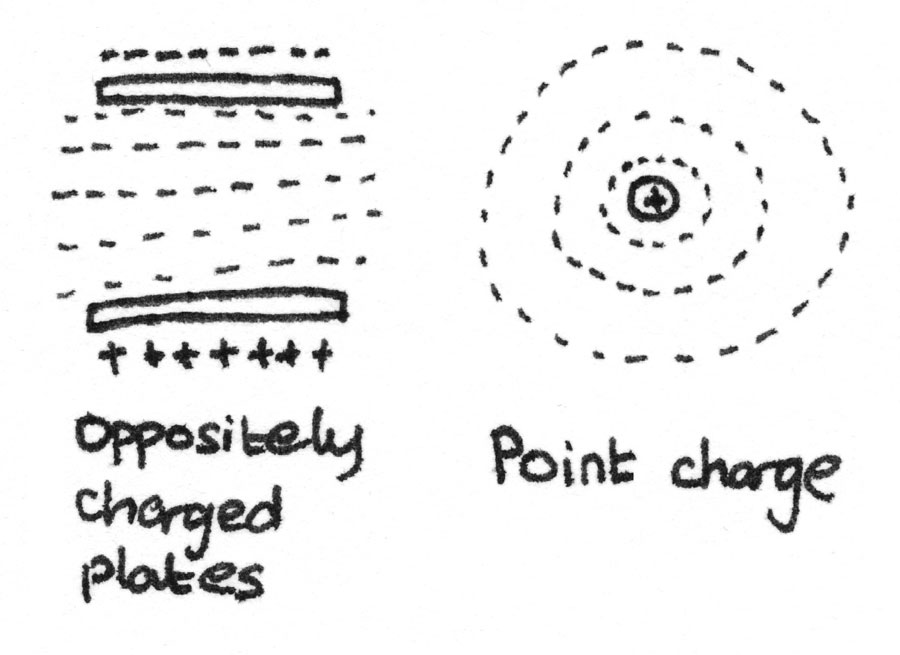