Field lines are the paths that a gravitationally attracted object follows towards a heavier object. There are different types of field patterns:

By using Newton's Universal Law of Gravitation, the value of $g$ can be calculated, where $M$ is the mass of the large object:

Kepler's Third Law states that the orbital period of an object is directly proportional to the distance between the objects. It can be derived by using the formulas for centripetal force and gravitational field strength. 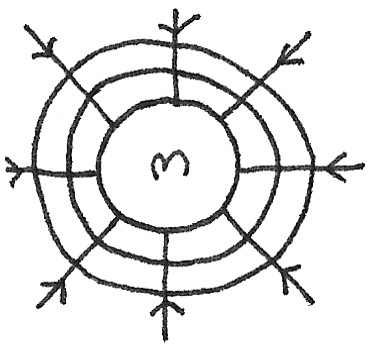 The potential gradient is the change in gravitational potential per metre at that point.

The difference in gravitational potential between two points can be calculated by using:

A geostationary satellite orbits the Earth directly above the equator and has a time period of exactly one day. The satellite therefore remains in a fixed position above the Earth. These are useful for communications or weather monitoring.